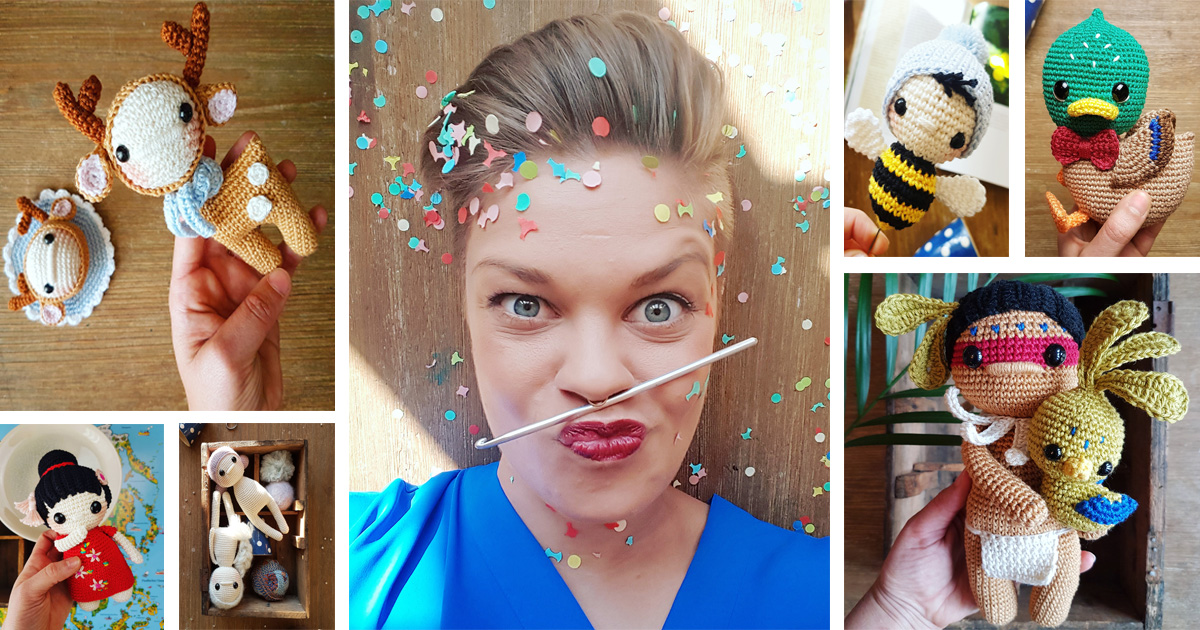 Outside of Instagram, Karline.Konfetti is actually Sandra, she is 29 and lives with her husband, child and two dogs in Kitzscher – or, as she calls it: “in the beautiful southern part of Leipzig“. Sandra has been crocheting since she was five years old – she learned the traditional way, being taught by her grandma, working on pot holders. And when she isn´t designing super sweet and colorful crochet projects, she works as a caretaker for dementia patients. We had the opportunity to talk to Sandra and ask her a few questions:

Karline Konfetti is not your real name – how did you choose the name?

It was available *laughs*. I am a little bit like confetti: colorful, crazy and sometimes a little annoying. You can´t get rid of me that easily. Just like confetti. Once that settles, then ... Also, my dad´s nickname is Karl and that was the perfect addition to „Konfetti“. Choosing a name is difficult, I´ll be honest about that – and this name fits.

Difficult question. For a time, I dissociated myself from social media, the conversational tone in particular on Facebook is a little difficult. I felt like I constantly had to provide the outside world with something about myself, and I don´t like that. Who is really interested in my favorite place to buy a Döner or where I currently am? At some point I discovered Instagram and just couldn´t understand how it works *laughs* – but after some time everything worked out and I found it exciting to gain new experiences, plus I was all for the pretty pictures. It broadenend my horizon as far as social media is concerned, because the focus wasn´t on me as an individual anymore. Then I started to upload my projects as pictures and received a lot of positive feedback – until then, I always considered crocheting to be something that´s only for little old ladies. And who could possibly be interested in the stitches on my crocheting hook? In time, more and more people became aware of me, the subscriptions increased and I met many Insta-girls that share the passion for crocheting. Thanks to persistent people, I began to write down the instructions – which is all the more peculiar as I am not able to read pattern instructions *laughs*. So I can´t work any projects by following the instructions. I just prefer my own things. As far as the blog is concerned initially I had a shop, but had to close it due to personal reasons. So why not give away the instructions on a blog for free or rather make them available to everyone? That keeps the pressure off. Operating a shop, you always have that economical component that I don´t have with the blog – I don´t have to write if I don´t want to, and if I do write, it makes others happy and I am more relaxed.

Do you have another (creative) hobby, aside from all that crocheting?

There´s another one of those little-old-lady´s things (so-called by others): I have been singing in a women´s quire for many years. I like to do things that are creative, I draw a little here and there and I am a social person and just enjoy my life. I also have a small garden and a Dachshund, I fit all the local stereotypes. Though one thing I am not is punctual *laughs*.

Have you experienced any failures in the world of yarn crafting and what would you still like to learn?

Some time ago, one of my followers gave me a set of DPN´s and a knitting book for children – let´s put it this way: the knitting needles are no more. I´ve asked many girls to show me how to knit, but it never worked. I think I am just too stupid for that. I sit there stiff as a poker and it feels like I am breaking every finger. After some time, I put down the knitting and pick up my crochet hook. It´s probably my own stubbornness that hampers any progress.

What are your crocheting goals? Is there something particular that you would like to design?

I don´t have any goals at all, I am a person that is easily inspired. So there is nothing that I have to design – I am just taking things as they come. I have no ambitions to design this or that – that just adds pressure and I can´t work under pressure. I can´t unleash my creativity and that should be what it´s all about. I should have fun doing it.

What do you love most and despise the most about your hobby?

What a question! What do I love most and despise the most? I hate to follow pattern instructions, it just really annoys me. I hate the lack of room in my apartment, I just don´t have enough space for my yarn *laughs* – that really is the biggest problem. I hate doing the same thing 5 or 6 times over. I don´t feel like doing 20 teddy bears, I do them once and that´s enough. I have this hobby because I actually enjoy everything about it. I don´t want to sound arrogant, but apparently I am good at what I do and that´s fun. I have to bring the ideas in my head to life, that clears the mind and there´s definitely a meditative aspect involved. Maybe that´s why I can only make one of each – but that´s getting into psychology *laughs*.

When you tell someone you are a crocheter – what kind of comments, sayings and stereotypes are you confronted with?

Very often I hear: “yes, I can make that myself “ or, even worse, “I can make that myself, but cheaper“ – when I was still selling my things, I heard that quite often. As far as clichés are concerned, I get this granny thing *laughs* – though in the meantime that has been getting better, because the mindsets are changing and many people now do DIY projects.Many don´t even know the difference between crocheting and knitting, and sometimes people comment “Sandra is a great knitter“ – no, unfortunately she is not *laughs*. In general, there are a lot of positive and appreciative responses when people have seen my work, or they would like to see them and then they say, “hey, that looks better than the stuff my grandma made“ – and I am not saying this in a bad way. People think crocheting is crocheting, but crocheting is more than Amigurumi, you can do so much more. Dolls touch the hearts more than a lace afghan (though that can be appealing as well). Dolls have eyes and that almost gives them a soul.

Favorite Schachenmayr yarn: Catania (I could wrap my entire house with this yarn, that´s how much I have of it – if you would tie it together you could probably span the distance between Munich and Hamburg).